Thanks  to Lian Brook-Tyler for the opportunity to publish this article on the Born Happy website in April this year. 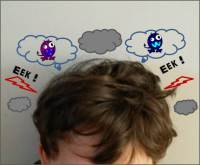 It started with the night terrors and insisting the light had to be on in the hallway all night 6 months ago and progressed to a fear of shadows and talking about monsters in the night. We have taken an interest in what he is saying and tried to explain that monsters were not real. But for someone for whom where reality starts and imagination ends is not clear this isn’t easy to do. – ie He talks about what happens to Peppa Pig and the Mr Men in the same sentence as he talks about what we did the yesterday.

A few days ago we noticed this blur between imagination and reality took on a different more sinister guise. We were on our way home from a long day at The Princess Diana Memorial Playground and he was very tired to the extent that he was whining because he had to walk. He started saying”‘Ga Ga” this and “Ga Ga” that. His friend decided to take offence to this, so put his fists up close to his face to threaten him. His mum and I put a stop to this straight away but you could see that my little boy was visibly scared. We explained to his friend that ‘Ga Ga’ to my little boy wasn’t just a baby word it was his Grandma’s name. – (She having claimed the first word his said as her name. – Not an uncommon occurrence amongst keen Grandma’s and mother in laws or so I’ve heard. – Tee Hee)

That evening we were having a lovely dinner and my eldest kept telling us about when his friend had looked like he was going to hit him and how scared he was. Each time he told us he looked visibly scared like he was reliving the experience. We said “it’s over now” and “it’s Ok and he didn’t hit you and you are OK” but he kept telling it to us and getting visibly scared by it. Then as we were getting him ready for the bath he kept saying it again and I said “What are you doing now?” and he said “Getting ready for the bath” so I said “So what your friend did isn’t happening now is it?” and he said “No” and he seemed to start to understand so I said “All there is in life is what is happening now. What you are doing in the moment.” And he seemed happier and relieved and didn’t mention it again. I added “The past isn’t real and the future is your imagination so the only thing that is real is what is happening now” I really didn’t think he understood this last bit but was happy to settle for bringing him back to the now to start with. Then the next day he asked me what we did yesterday so I said we had gone to the Princess Diana Memorial Playground. So he said “yes and my friend went to hit me but he didn’t.” and recounted the story again. This time though I could see it didn’t bother him at all. Then he said something like “but that’s not real now.” – So I think he understood more than either my husband or I had imagined he would.

I guess our little boy is changing. He is becoming more conscious of his thinking and therefore more affected by it. It got me thinking about how as adults we also innocently get caught in our thinking and run things that happen over and over in our heads hurting ourselves in the process without even realising it. Sometimes we may even act from that negative thinking and as a result possibly say or do hurtful things to others. As adults some of us are just less obvious about it or maybe not, but it’s all the same.

Life happens: It’s the meaning we give to it that gives us the experience of it and it’s up to us to bring ourselves back to the present to see what really is so. Because the only reality is what is happening now in the moment – and even that comes from our own individual unique viewpoint of it.

I will speaking at Tikun in Temple Fortune next Tuesday 23 June at 8pm  on ‘The Freedom To Be – Good Moods, Bad Moods Warts and All’ with my great friend and teacher Toby Walzer so if you’d like to know more click here.